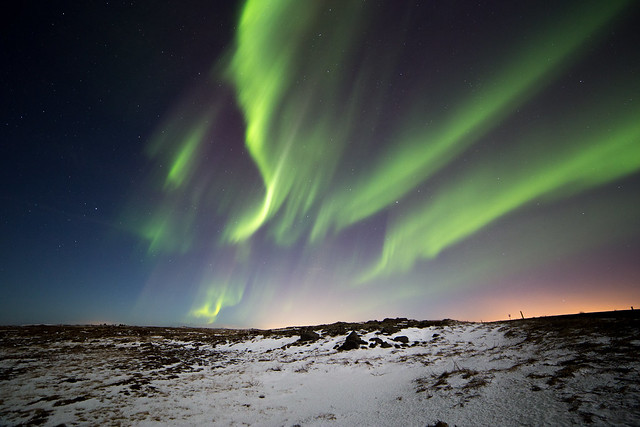 What you need to photo the Northern Lights

How to do it

In the days before you travel, check the northern lights activity. You want the KP Index, which ranges from 0-9, to be the highest possible. There are many apps you can download for your smartphone or android.

On the day, focus your camera on a point in infinity and switch the focus setting to ‘manual’ to stop your camera hunting for a point to focus on.

Try using a small piece of tape or a non-permanent marker to mark the focus point on your lens, in case you knock it.

Get ready by wrapping up warm with plenty of thermals! Think about wearing a liner under your mittens so that you can change the settings of your camera without feeling the cold. If you want to invest in something more serious try some gloves that allow your fingers to be free to move the controls

Always take a fully-charged battery or carry a spare in a warm place, the cold temperatures will drain battery life.

When on location, set your camera on its tripod, use the hook to hang a weight to make it more stable. The infrared head torch will preserve your night vision and help you compose your shots in the dark. Using a remote control to make the pictures sharper by removing camera shakes.

Take a few trial shots, experiment with exposure; think about how fast the lights are moving. A shorter exposure will capture fast moving lights but long exposures can be creative and provide better image quality when you use the tripod.

Try and aim to open your aperture at f/2.8, if your kit lens has a smaller aperture than this you may want to consider upgrading your lens. ISO should be between 400 and 1600 to let more light in during the dark conditions, anything above this and there will be too much noise (the film grain effect).

Start off with a long shutter speed of around 20-30 seconds, try not to touch the camera during the exposure and use the remote if you have one.

Try to use the surrounding landscape in your composition to make your shots more interesting. Elements such as trees, lakes and cabins will add a story to your image.

Finally, do not focus too much on getting the perfect photo. You may be the best photographer in the world but sometimes all it takes is being in the right place at the right moment. Take time to enjoy the scenes around you as well.

It’s strange to think that, only eight years ago, the Nordic island of Iceland was going through a full-scale crisis. A hasty attempt to mould the country into a global financial capital had come tumbling down, as the fragile economy buckled under the great weight of its own rampant growth.

The 2008 financial crisis hit, and Iceland’s vision of becoming a foreign investment and trading mecca was shattered. Less than 24 months later, with the country still in economic breakdown, the mighty volcano of Eyjafjallajökull erupted, releasing an ash cloud that blanketed Europe; causing 100,000 flights to be cancelled and costing the European economy $5billion. Indeed, to the outside world, it seemed like quaint and mysterious little Iceland — home of glaciers, the world’s strongest men and Björk — had become something of an all out catastrophe zone.

Yet, eight years on, it feels like those financial and volcanic dark clouds never came at all. The country has blossomed emphatically in recent times to become one of the most popular tourist destinations in the world, doubling its foreign influx across the last decade, as new hotels are constructed and visitors come flocking in search of volcanoes, lagoons, black beaches, picturesque hiking, jaw-dropping glaciers, magnificent fjords, the Northern Lights, whale watching, endless natural beauty and, yes, “Game of Thrones”. In fact, tourism as an industry now accounts for 34% of Iceland’s export revenues. So how did this dramatic little rock in the North Atlantic turn itself from a bankrupt disaster zone into one of the world’s most desirable holiday destinations? 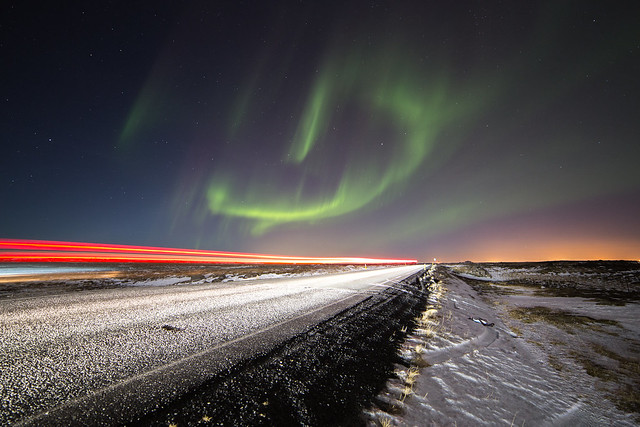 The story of Iceland’s recovery is one other countries will be learning from for years to come. By choosing not to bail out its banks after the crisis, and instead negotiating a loan from the International Monetary Fund and implementing new reforms and austerity measures, the country rapidly turned its fortunes around. Unemployment is now lower and income higher than before the crash, and one of the main factors driving this full-throttle recovery has been a previously untapped seam of tourism.

Reykjavík, the capital, is of course the most popular destination. With its 5-star dining, colourful architecture, thriving arts, Europe’s largest whale museum and, of course, the world-famous Blue Lagoon geothermal spa, it has become a bucket-list long weekend destination. But Iceland’s sustained growth is way bigger than the story of one city. It’s about hundreds of stories happening all over the country, and while many visitors still focus on the south and west — prioritising the capital and the geyser-and waterfall-lined Golden Circle route — the Icelandic tourist board is encouraging travellers to explore further afield. And for a country with a population of only 320,000 (almost 26 times less than London) it’s quite unbelievable just how much there is to see if you’re willing to explore. 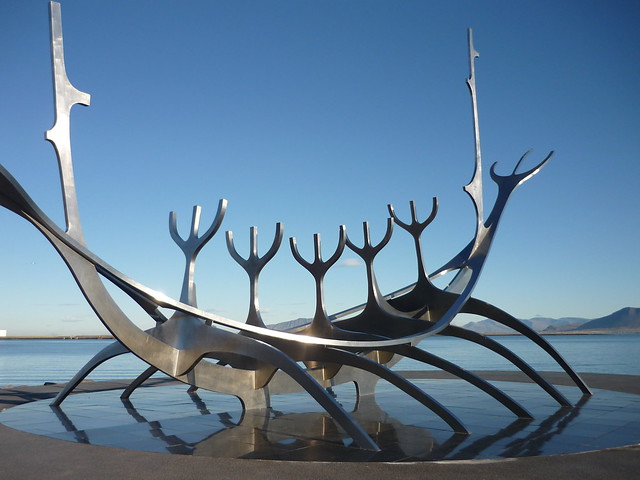 At the top of the country, nestled in the haunting yet sublime vistas of northern Iceland, is Akureyri, the country’s second city, only a 45-minute internal flight from the capital. It boasts outdoor thermal pools, botanical gardens, killer-whale-watching expeditions, and proper traditional Icelandic grub: smoked lamb, salt cod steaks, plokkfiskur and strong local beers. Akureyri serves as a cosy base for those who wish to explore Iceland’s most staggering tourist attraction: volcanoes. Those with stamina can choose to drive and then hike up these geological titans, but for many who prefer to see their lava from a little further than spitting distance, local pilots offer daily expeditions from the city, flying over the Holuhraun lava fields and the extremely active Bárðabunga volcano.

And, of course, it’s also a fine place from which to take in the spectacular Northern Lights. The phenomenon is quite unpredictable, but the Icelandic Met Office does offer information on the probability of seeing them: on clear nights from September through April, the hit rate is pretty high.

While the north may be renowned for its barren landscapes, over in the east, forests, fjords and farmlands make for a different experience. Flights from London Gatwick to the small town of Egilsstaðir will be launching in October, making for a remarkable destination for people to stay as they embark on exploring the East Fjords. Here, one can find small communities of farmers, fisherman and art students living side by side, amid breathtaking mountain ranges and seaside villages. If you come to Iceland to feel closer to earth, then this is a place you can embark on adventure hiking trails and then relax afterwards under naturally hot waterfalls.

Such is the spread of Iceland’s tourism boom, there are still little secrets that are only just becoming known to visitors. A 90-minute drive south from the East Fjords takes you to Djúpivogur, a coastal town recently dubbed by travel writers the “slo-mo capital” of Iceland for its hyper-relaxed approach to life. Here, Coca-Cola and petrol signs are banned and instead life revolves around long meals, relaxing walks, pony rides, museums and local art culture. It is a town where the concept of time itself seems to be having a day off, and if you were to ever adventure around Iceland, this would be the place to end your journey. 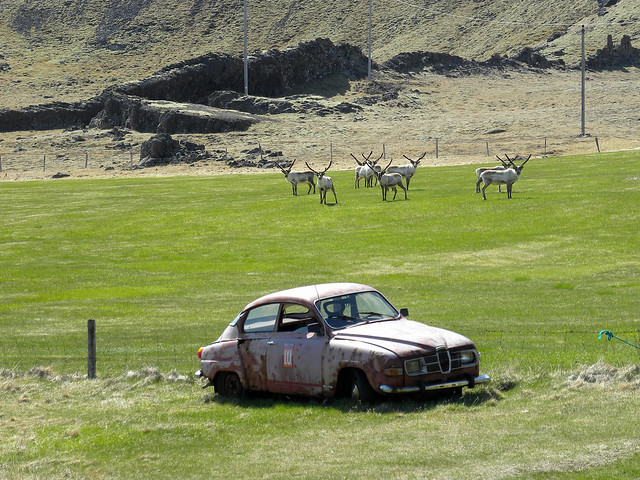 But if your reason for visiting is to sample everything this country is about at a slightly quicker pace than the folk of Djúpivogur are used to, there is one clear option. For years now, the Golden Circle has been one of the most popular tourist attractions in Northern Europe, and it’s easy to see why. This 190-mile route — which loops from the capital city towards the south — takes in cascading waterfalls, erupting geysers, national parks, spectacular lakes and rumbling volcanoes. If you’re wise, you’ll include Thingvellir National Park, where you can have the quite baffling experience of walking along the fissure where the American and Eurasian tectonic plates diverge. Braver visitors can even snorkel between the two plates if they wish.

Since the days of the Sagas, Iceland has always been a country that knows how to tell its own stories, and as blockbuster movies like “Thor”, “Interstellar”, “Prometheus”, “Oblivion”, “Noah” and “The Secret Life of Walter Mitty” all flock to film there, it’s become apparent that many are now using Iceland to tell theirs. Where tourism in this country will go next is anyone’s guess, but with the government being forced to impose restrictions on Airbnb amid the exponential influx of visitors, it sure isn’t showing any signs of stopping. One thing is for sure, there has never been a better time to go.